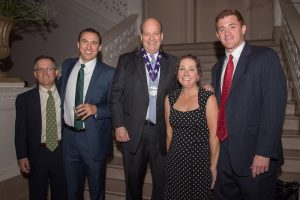 Founder and member Georges Legrand and fellow honorees of the New Orleans CityBusiness Leadership in Law class of 2017 were recognized at a reception at the New Orleans Museum of Art (NOMA) on Monday, May 22, 2017. The publication also produced a special Leadership in Law insert that includes interviews with each of the attorneys.  We are delighted to share Georges’s interview, which is appended below.

A native of New Orleans, Georges Legrand graduated from the University of New Orleans and Loyola Law School. He briefly considered medical school, but decided law school was a better fit. An attorney since 1979, his specialty is maritime law.

Legrand is a member of Mouledoux, Bland, Legrand & Brackett. He points out that marine work is very diversified and he enjoys the different aspects.

One of his recent memorable cases involved an “embarrassment of navigation” case (equivalent to running someone off the road, only it involves a river). His client was expecting a poor result, but they prevailed and the client was thrilled.

Legrand feels very satisfied when a corporate client appreciates his work, but he doesn’t mince words when asked about his proudest accomplishment.

“My proudest accomplishment is hopefully being a good father and husband. That probably means more to me than anything,” he said. His biggest challenge is arranging his time to allow him to do that.

He advises aspiring lawyers to pay attention to detail and do what’s necessary to produce a great work product. In his opinion, if you do those things everything else takes care of itself. He also urges them to be timely and communicate with clients.

“I don’t know how you make a living if you’re not timely in responding to your customers,” he said.

Outside the office, he loves the food scene in New Orleans and hopes to be a food writer when he finishes practicing. He also loves to travel and spend time with his family.

He believes in being a steward of the community, and he and his wife are active in their church and various community organizations. Legrand founded a marine seminar for the Offshore Marine Services Association, made up of boat operators in the Gulf. It educates them in the nuances of marine litigation to help them mitigate issues or avoid ending up in court.

“Knowledge is power,” he said. “If you’re going to end up in court, get the best result.”