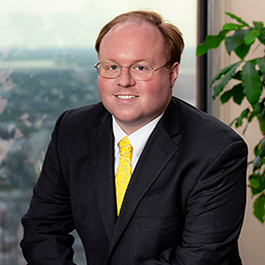 As noted in New Orleans CityBusiness:

Edward McAuliffe is as associate with Mouledoux, Bland, Legrand & Brackett, where his practice areas focus on trucking and transportation and insurance defense.

Prior to joining the firm, McAuliffe was an assistant district attorney in New Orleans, where he rose quickly through the ranks, eventually heading up the district attorney’s bond and asset forfeiture division. He represented his office at the Louisiana District Attorney’s Association, aided in overseeing civil litigation and implemented new policies and procedures both in his office and throughout the New Orleans criminal justice system.
As an assistant district attorney, McAuliffe became one of Louisiana’s experts in the field of forfeitures and was appointed to the Louisiana Sentencing Commission’s front end work group on bail. He was intensively involved in writing the bail overhaul passed by the Louisiana Legislature in 2016, working with the Louisiana Law Institute, the Legislature and the bail surety industry to craft the comprehensive reform.

A native New Orleanian, he received his juris doctor from LSU in 2011 and has a bachelor of arts degree from Washington and Lee University. He is admitted to practice law in Louisiana and in the U.S. District Court for the eastern district of Louisiana.