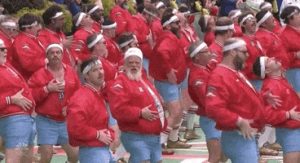 Member Dan Sullivan appeared in the Macy’s Thanksgiving Day Parade as part of the 610 Stompers, New Orleans’ one and only all-male dance crew. Dan is not just a master in the courtroom, but as proven by his performance in NYC, he is also able to wow millions of viewers with his “extraordinary moves.”

The Stompers have not only performed for more charitable causes than they can count, along the way they’ve raised and donated hundreds of thousands of dollars to those causes. They call it “using our powers for good.” But while spreading charity is a big part of what they are about, spreading their passion for dance is the true soul of their group and their lasting mission. It’s what keeps them going and growing and dancing into the hearts (and feet) of their fans.

You can watch Dan and his fellow Stompers in action on Thanksgiving Day in the following video posted on Vimeo by Eric “Doctor Disco” Miller.

The 610 Stompers are many things but, first and foremost, they are “Ordinary Men with Extraordinary Moves.” Since their birth in 2009, they have evolved and grown into a 100-man strong, all male dance group whose bold mission is to return the ordinary man to the glory of dance. Men from their 20s to their 80s now proudly call themselves 610 Stompers, drawn from all walks of life and from across the country. While they come from many places, New Orleans is their birthplace and will always be their home. Only here could they create and nurture and grow the singular brand of entertainment they bring to the masses. As diverse as they are, they each share a passion for dance that fires when they see the faces of their fans light up as they dance by. And entertainment is not all their moves bring – the 610 men not only have extraordinary moves, they have extraordinary hearts.