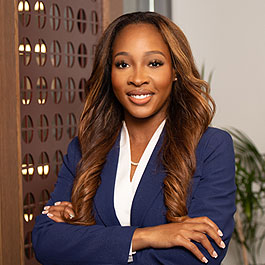 Dillard was the first Louisiana team in the history of collegiate mock trial teams to receive a bid to compete in the national competition, which was held at Elizabethtown College in Lancaster, Pennsylvania, April 8-11, 2022. Dillard received the prized Spirit of AMTA Award, while Lajeanne Shelton won an All American attorney award and and Renee’ Simien won an All American witness award.

Will Sutton of The Advocate wrote a wonderful story about Dillard’s impressive wins, “Returning home with pride, success and bright futures.” As noted in the article, “Dillard was one of about 700 mock trial teams that started competing at the beginning of the 2021-2022 season. Of that large group of teams, 192 moved to regional tournaments. Only 48 of those teams earned a chance to travel to Lancaster for the national championship tournament.”

Congratulations to Alicia, her fellow coaches and everyone on the Dillard University Mock Trial Team!

Alicia D. Frison’s practice focuses on the defense of employers and insurance carriers for claims arising under the Longshore and Harbor Workers’ Compensation Act, Defense Base Act, and War Hazards Compensation Act. Prior to joining Mouledoux, Bland, Legrand & Brackett, Alicia served as a public defender in New Orleans, Louisiana, handling misdemeanors and violent felonies. Despite the challenges of the pandemic and Hurricane Ida, she closed more than two hundred cases with favorable verdicts.

Alicia’s experience as a public defender has instilled in her the value of bringing harmony to the litigation process in order to advance her client’s interests. “I’m a fierce advocate for my clients. I have learned that maintaining an amicable relationship with opposing counsel is key to achieving a favorable outcome, no matter how challenging the case.”

While attending Howard University School of Law, Alicia led the Huver I. Brown Trial Advocacy as President. During her time she won the 2020 Regional Championship, along with the distinction of “Best Advocate” at the Texas Young Lawyers’ Association National Trial Competition. Alicia has received a host of awards in the field of Trial Advocacy throughout her ten years in the field.