Mouledoux, Bland, Legrand & Brackett continued its support for the annual Defenders’ Memorial Day Challenge Regatta held for members of the military at the Southern Yacht Club (SYC), where Alan Brackett is a member. The event recognizes the men and women of the U.S. Armed Forces, and their families, for their devotion to duty and willingness to make the ultimate sacrifice so that we all may enjoy liberty. 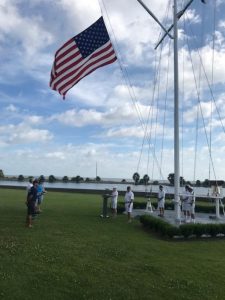 While the day is full of fun, camaradarie and friendly inter-service rivalry on the water, the Flag Ceremony and 21-gun cannon salute remind us of the true significance of Memorial Day and what everyone is there to honor.

“I truly appreciate MBLB’s stalwart support of the Defenders Challenge. Their contribution makes it possible for us to provide breakfast, barbeque and beer, as well as Defenders Challenge baseball caps, keepsake engraved medallions for all sailors and their guests, and a marker trophy for the Champion team,” said Cherrie Felder, regatta chairman. 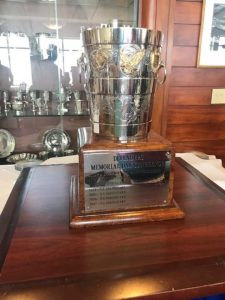 This year, the Coast Guard won the Defenders’ Memorial Day Challenge Regatta. They have won every year but the first, when the Army won.

In the fall of 2011, the U.S. Coast Guard Foundation held a meeting at Southern Yacht Club, introducing the Coast Guard’s program for building eight new Leadership 44 training sailboats to replace the aging Luders yawls the Coast Guard Academy had acquired from the U.S. Naval Academy a number of years ago. After the presentation, Vice Commodore, Julian Richards, was talking with Foundation board member, Cherrie Felder, and suggested that Southern should do something for the Coast Guard to show their appreciation of their support and cooperation.

Julian mentioned a regatta tied to the Juby Wynne Memorial Day regatta, and, after agreeing with Julian, Cherrie learned first hand about the Halloweeny Rule. She was appointed Regatta Chairman, and followed up calling Capt. Peter Troedsson, an experienced sailor and Chief of Staff for the Eighth Coast Guard District. Troedsson expressed his appreciation, but suggested that a challenge to all of the services might be more fun, and the die was cast for the first annual Defenders’ Memorial Day Challenge Regatta. 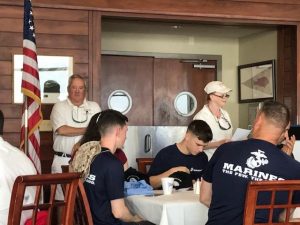 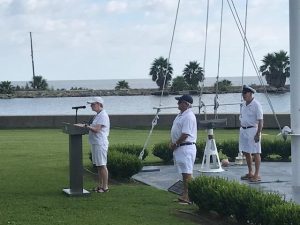 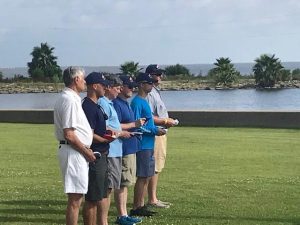