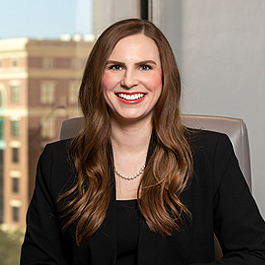 Ava Maria Wolf’s practice focuses on the defense of employers and insurance carriers for claims arising under the Longshore and Harbor Workers’ Compensation Act, Defense Base Act, and War Hazards Compensation Act.

During Ava’s senior year at The University of Southern Mississippi, Ava was the Campaign Director of the It’s On Us campaign, which raises awareness and fights against sexual assault on U.S. college campuses for both men and women, earning her the Student Government Association’s first Campus Impact Award. “Being the face of the It’s On Us campaign taught me how to discuss a difficult but important topic with a variety of people. I use these skills today when I communicate with my clients and opposing counsel. Open communication leads to a desirable outcome for all parties.”

Ava attended Loyola University New Orleans College of Law, where she was named a Moot Court Top Four Oralist in the spring 2019 intramural competition. She was also a member of the Admiralty Moot Court team and served as an Associate for the Loyola Maritime Law Journal.

Ava is native of the Mississippi Gulf Coast. In her free time, she enjoys spending time with family and friends, including her husband, Henry, and their two dogs, Oliver and Lily Bean. She also enjoys traveling, a good crossword puzzle, and cheering on the New York Yankees.